Forward to the Past

Slowly I make my way through the migration from FTP publishing to hosting on Google's Blogger servers.  I'm getting used to subdomains and DNS changes and CNAMES and the like, things I managed to avoid like the plague in my first decade of amateur online publishing.

Time to move into the 21st Century, right?

Not really.  I struggled and suffered so with the new Blogger format as a way to facilitate bringing the news of the Nineteenth Century to readers today.  Now, those hungry for the latest headlines from 1870 will be able to access them via their feed readers and so on.  Introducing the new and improved... 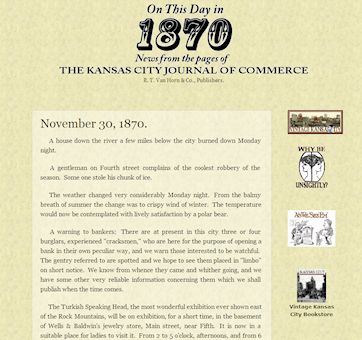 1870 was a really exciting time in KC history, if one gets excited about such things.  The Civil War was behind them, the railroads and stockyards were thriving, and horse-driven streetcars were facilitating the growth of a young metropolis which wanted nothing more at that time than to be bigger and better than her rivals of Leavenworth and St. Joseph. But one of the biggest changes taking place in 1870 is the grading of the streets.  In 1870 the city was literally being flattened.  Before the streets were graded, buildings along the road used to sit high upon hills and cliffs.  Here's what Baltimore Avenue looked like, for example:

After the streets were graded, that same scene looked very much like it does today:

My favorite thing about the news from 1870 is that I'm typing the words from Col. Van Horn's paper, back when he was running the show.  If you click on his name above, you can learn a lot about one of Kansas City's foremost statesman.  My favorite Col. Van Horn story isn't found there, though.  It was taken from his obituary in 1916, concerning the time when he, as Mayor of Kansas City during the Civil War, left town unexpectedly one day:

When Mayor Van Horn left the city the “secessionists” loudly proclaimed that he had fled to avoid the consequences of his well known Unionist sympathies. But when he returned at the head of federal troops and organized a loyal battalion, becoming post commander of the military post of Kansas City as well as chief executive of the civil municipality, a different tune was heard.
The humorous part of the story extends over into the dual personality of Colonel Van Horn who, as post commandant, cordially aided and abetted the efforts of Mayor Van Horn to maintain peace and order. It is doubtful if any mayor ever received heartier support from the military authorities than did Mayor Van Horn at the hands of then Major Van Horn, post commandant.

One of the greatest services rendered by Colonel Van Horn to this immediate community and to the entire West was his action in bringing about the occupation of Kansas City by Union forces, thus saving not only Kansas City from immediate capture by the Confederates but, in the judgment of impartial historians, preventing the overthrow of Kansas itself and its loss to the cause of freedom. Colonel Van Horn himself always modestly minimized his own part in this series of events, but the verdict of history has long been that Kansas City and Kansas owe him a debt which no possible honors that could have been heaped upon him could have ever measurably repaid.

So enjoy the old news from Col. Van Horn's paper, published daily, Monday through Saturday, as I get around to it.
by L A Little