Most Kansas City history buffs can tell you about Electric Park, and most of them know that there were two Electric Parks in KC. There were actually THREE, but we'll get to that later. I've often seen or heard the words, "The first amusement park in Kansas City was Electric Park." That statement is quite incorrect, so I'd like to go a bit farther back in time and talk about early amusement parks and venues in Kansas City that were already here before and when "Kansas City's Coney Island" opened its gates for the very first time in 1900. Travel back in time with me, if you will!

In the late 1860s, Kansas City was a town that enjoyed it's amusements. It was a Gateway for countless pioneers as they moved to settle in the West, and commerce was booming. The citizens, visitors, and the settlers who decided to stay here were never at a loss for ways to have fun. For men such as Wild Bill Hickok, Bat Masterson, and Wyatt Earp, Kansas City was their playground.

By the mid-1860s Kansas City flourished with 24-hour restaurants and saloons, billiard halls, ten-pin alleys (another name for bowling), shooting galleries, and, though it was not legal, a lot of gambling. Different circuses came to town regularly. There were fairs of various sorts, dances, and ice skating in the winter. Even though the town was still rough and still recovering from the Civil War, there was always something fun to do in Kansas City.

Much of livelihood of our town could be credited to members of the community that the Daily Journal of Commerce newspaper referred to as, "our fun-loving Germans."  Before amusement parks existed here, there were numerous beer gardens, thanks to German immigrants like Peter John Schwitzgebel, who opened the first known brewery in Kansas City in the late 1850s.

In 1865 another German immigrant, C.J. Frank, constructed a three-story building on the northwest corner of Fifth Street and Main, across the street from the courthouse. The first and second floors were a grocery store, and the third floor would soon become Kansas City's most popular amusement hall.  People would climb three flights of stairs to be entertained by everything from church socials and lectures to theatrical and burlesque performances. Frank's Hall would also bring popular circus sideshow acts like Chang and Eng, the "Siamese Twins," and General and Mrs. Tom Thumb to Kansas City. 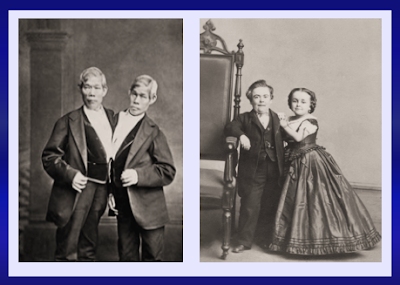 There was always something going on at Frank's Hall, until snow collapsed the roof of the building at 3 o'clock in the morning on December 18, 1878, killing two. By this time Kansas City had plenty of other amusements to offer.  1870 saw the completion of the Coates Opera House, and the same year the Kansas City Driving Park brought horse racing to town. 1870 was also the year Kansas City got it's first real amusement park.

In Kansas City, and probably a lot of American cities, 19th century amusement parks were often built to serve one of two purposes, or possibly both, in addition to providing a place for recreation of the town's citizens and visitors. One purpose was to sell beer. The other purpose was to provide a reason for people to ride streetcars which had lines that led far outside of city limits and the business districts. The thinking was that if a streetcar line was built that went "way out into the sticks," putting a park at the end of the line would not only encourage people to ride the streetcar, it would also inspire real estate development along that line. These were called "Trolley Parks." 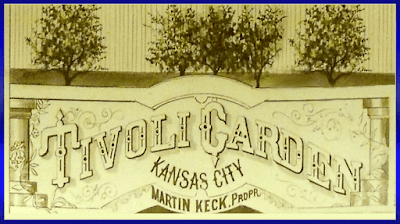 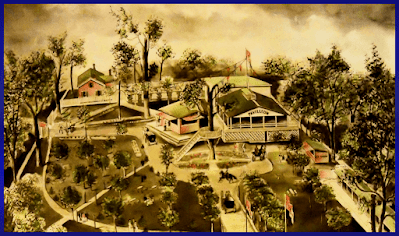 The bandstand at Tivoli Garden was a platform built around a large tree in the center of the park, and there was always music and dancing. There was a "ten-pin alley," and an ice cream parlor of sorts. There was a pavilion where "entertainments," called "varieties" (later to be called Vaudeville) were held.  Tivoli Garden lasted for around ten years, until an ordinance was passed forbidding the sale of liquor on Sunday, and people were looking elsewhere for entertainment.

I'll be waiting for the next chapter.