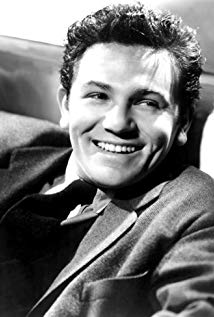 John Garfield, my classic film heart-throb, was a hero of World War II. The only uniform he wore was on movie sets -- he couldn't serve in the military (though he very much wanted to) due to a heart condition. So he traveled with the USO entertaining troops overseas, he co-founded the Hollywood Canteen, a star-studded club that entertained the troops lucky enough to come through Southern California; he helped sell War Bonds, helped raise money for the Red Cross, and he played film roles that likely inspired thousands of men and women to enlist in the Armed Forces (Pride of the Marines, Destination Tokyo, and others). He was as patriotic as an American could possibly be while our country was at war. He was an absolute hero to those who served and to his country, and nothing less.

And what thanks did he get from the United States government after victory was declared? He was pretty much hounded to death at the age of 39 by the House Un-American Activities Committee (the HUAC), a disgraceful arm of the United States Congress that infamously try to root out Communism, especially in Hollywood. The HUAC and its witch-hunts are roundly remembered as being one of the most un-American chapters in U.S. history, and its victims were many. John Garfield  refused to "name names" of Hollywood folk accused of being members of the Communist Party (which was not an uncommon thing to be in early 20th century America, and not at all illegal), and although he escaped going to prison (unlike the Hollywood Ten and others) he was blacklisted from working in Hollywood the year before he died. This was from the testimony he gave the HUAC:


"I have nothing to hide and nothing to be ashamed of. My life is an open book. I am no Red. I am no 'pink.’ I am no fellow traveler. I am a Democrat by politics, a liberal by inclination, and a loyal citizen of this country by every act of my life."

That wasn't good enough for men like Congressman Richard Nixon and other mostly forgettable HUAC members (whose only legacy is being remembered for being on the wrong side of history). Garfield was constantly followed by the FBI while plans were being drawn up to charge him with lying to Congress. He died before they got that chance.

I haven't been able to stop thinking about John Garfield since yesterday, when I heard Donald Trump disparage the women of color that with blatant racism he Tweeted to go back to the countries they came from. He and his minions tried to justify those Tweets by saying that these women are Communists who hate America. He said they were un-American. Sadly, the vast majority of Trump's "base" are either too young or -- let's say, to put it kindly -- too uneducated to know about the HUAC and their anti-American way of destroying lives and careers of people who they felt threatened the rich, white mens' status quo.

And like every single day, I can't stop thinking about my dear friend David, whose family also got caught up in HUAC drama. David's uncle George Marshall was, like many of David's close relatives, a great Civil Rights champion. David's uncle George spent three months in a Kentucky prison for refusing to cooperate with the HUAC. "In his appeal to the D.C. Circuit Court, Marshall pleaded that Congress had acted unconstitutionally when it created HUAC, and argued that his conviction and sentence were motivated by his militant fight for civil rights, for prosecution of the Ku Klux Klan and for the abolition of HUAC."

I will never stop being proud of men like John Garfield, George Marshall, and every patriotic American who took a stand against the corrupt, un-Constitutional HUAC.  They were on the CORRECT side of history. If you support the words, actions, and cult of personality that is Donald J. Trump, you are NOT.
by L A Little