Wisdom is a Woman

If you believe in the Bible, especially if you take every word literally, there is an important fact that you may have missed out on over the years.  Just like most Christians will tell you that Jesus Christ was around before our universe was formed (John 1:1-3), there was someone else out there with the Heavenly Father long before the Creation.

This is all from the Book of Proverbs, using the King James version, for those who won't accept any other.  Before the Beginning, there was somebody very close to the Creator, a female called "Wisdom."

Proverbs 7:4 advises, "Say unto wisdom, Thou art my sister; and call understanding thy kinswoman."

This isn't her first mention, but it establishes wisdom's female identity with certainty.


"The Lord possessed me in the beginning of his way, before his works of old. I was set up from everlasting, from the beginning, or ever the earth was.  ... When he established the clouds above: when he strengthened the fountains of the deep: When he gave to the sea his decree, that the waters should not pass his commandment: when he appointed the foundations of the earth: Then I was by him, as one brought up with him: and I was daily his delight, rejoicing always before him; Rejoicing in the habitable part of his earth; and my delights were with the sons of men."

In all Chapter 8, it's shown how she dwells on this planet, amongst the sons of men, trying to make contact, a frustrating prospect when one is Wisdom and most men are foolish, as she point out early, in Proverbs 1:22.  So very often these same words, in sermons given at churches by preachers, are spoken as if God said them, but it wasn't God who said them. It was the female Wisdom speaking. From Proverbs 8:2-7:


"She standeth in the top of high places, by the way in the places of the paths. She crieth at the gates, at the entry of the city, at the coming in at the doors. Unto you, O men, I call; and my voice is to the sons of man. O ye simple, understand wisdom: and, ye fools, be ye of an understanding heart. Hear; for I will speak of excellent things; and the opening of my lips shall be right things. For my mouth shall speak truth; and wickedness is an abomination to my lips."

From the beginning of the Proverbs the importance of this female entity is made clear:


"Wisdom hath builded her house, she hath hewn out her seven pillars: She hath killed her beasts; she hath mingled her wine; she hath also furnished her table. She hath sent forth her maidens: she crieth upon the highest places of the city, Whoso is simple, let him turn in hither: as for him that wanteth understanding, she saith to him, Come, eat of my bread, and drink of the wine which I have mingled.  Forsake the foolish, and live; and go in the way of understanding. " Proverbs 9:1-6 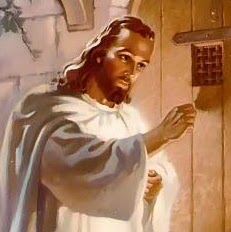 Just like this picture you always see of Jesus knocking on the door of your heart trying to get in, Wisdom is out there, and she's calling out to people who know they don't know everything.  All you have to do is accept her, the same way you accept the Messiah.  She will give you understanding that you won't find otherwise, no matter how hard you search, and she'll tell you EXACTLY what you need to know in order to be wise.  It can pretty much be summed up in two very simple things, but you'll need to read the Proverbs to find out what they are (just keep clicking the arrow pointing right when you get to the bottom of the page).

This, my friends, is straight from the Bible.
by L A Little