Thursday, October 16, is the International Shake-Out for earthquake preparedness, brought to us by the U.S. Geological Survey and other natural disaster agencies and organizations. Millions of people, companies, schools, and households will probably be holding an earthquake drill for the first time and learning what to do in the event of an earthquake.

It's a good time to talk about the earthquakes that have been swarming in Oklahoma.

National Geographic tells us that from 1978 to 2008, Oklahoma experienced an average of one earthquake a year of magnitude 3 and higher.  But look what's happening now... from one a year to around 3000.  This graph was made in July of this year: 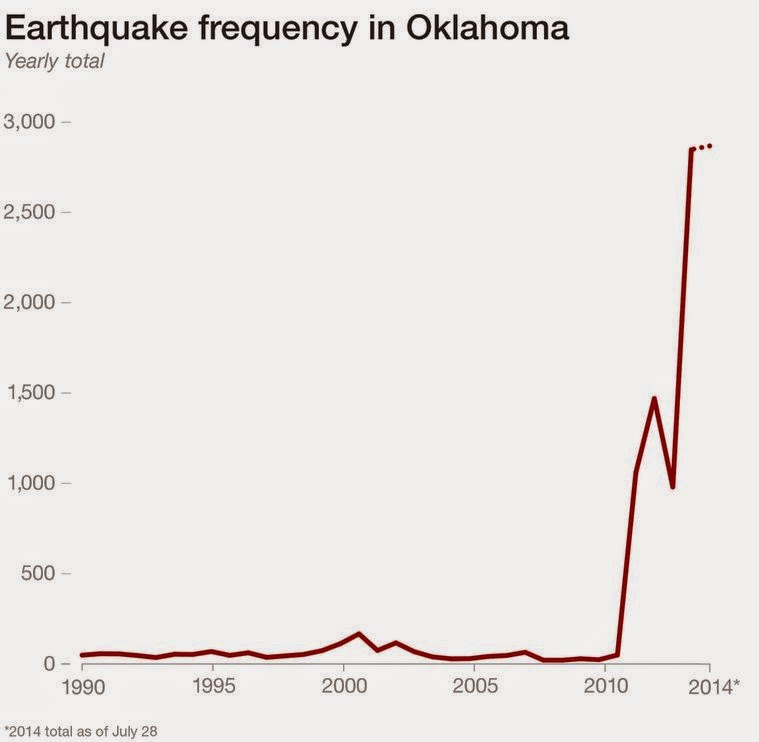 Let's look at today's Oklahoma (and southern Kansas) earthquakes from the USGS website, which only lists earthquakes measuring larger than 2.5 on the Richter scale.   The orange dots are the earthquakes over the last 24 hours. 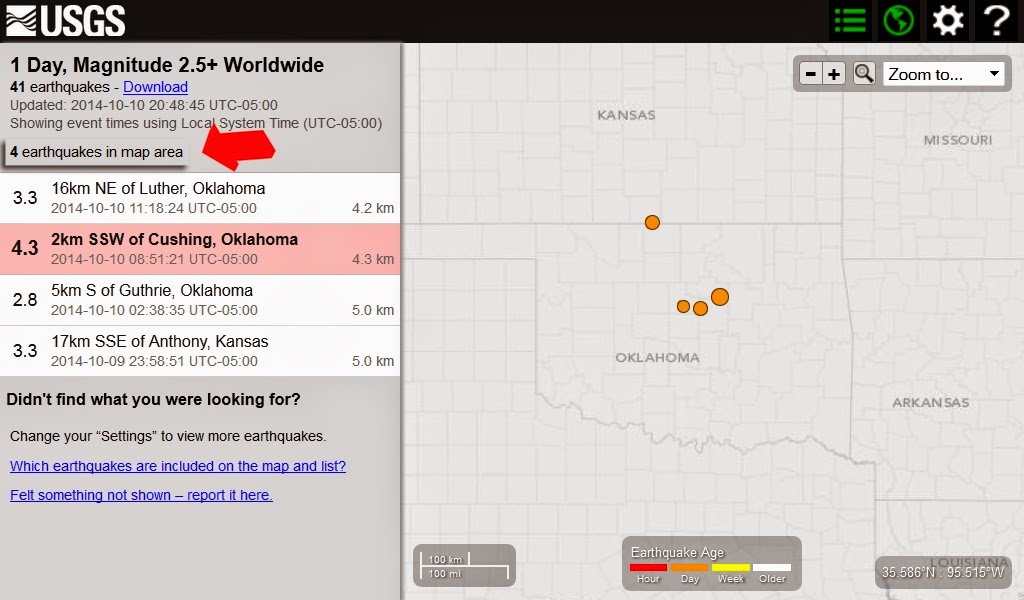 The yellow dots are the earthquakes that have happened over the past 7 days.  The bigger the dot, the bigger the quake, and you can't see all of the dots because some of them are laying on top of the others. 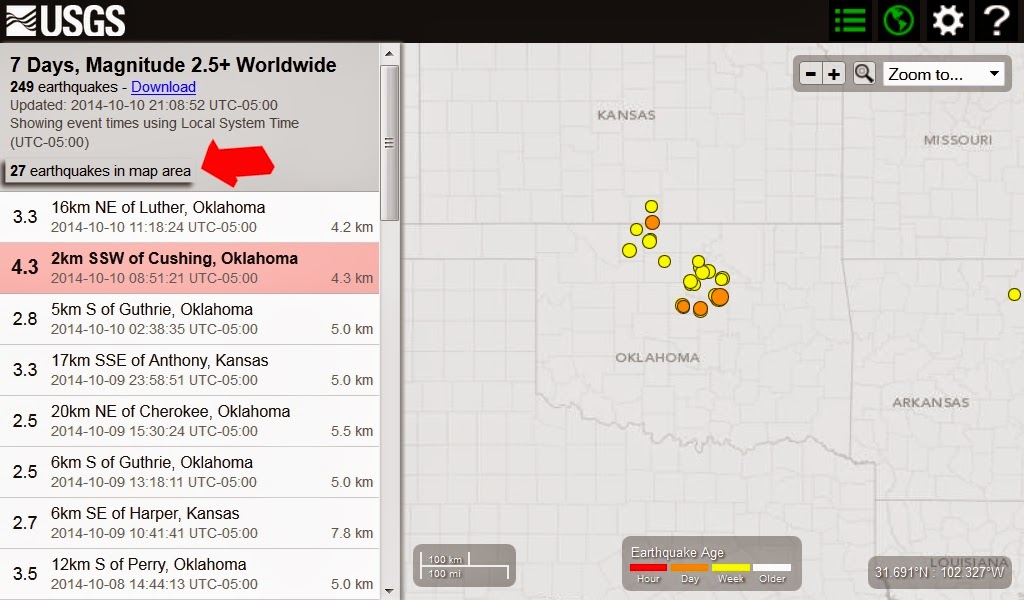 Now here are the Oklahoma/Kansas earthquakes of the past 30 days.  The white dots are the quakes that happened more than a week ago, but in the past month. 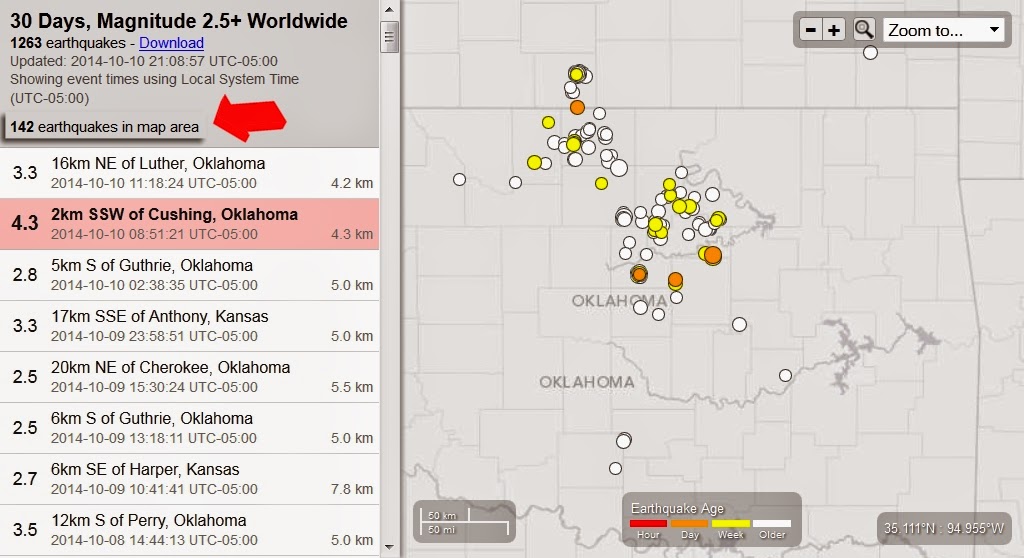 A quote about an Oklahoma insurance salesman from the National Geographic article titled, "Oklahoma Grapples With Earthquake Spike—And Evidence of Industry's Role" :

"Kahn, who opened the Lynnae Insurance Group in 2002, said he sold earthquake coverage to two homeowners during the first decade he was in business. During the past six months, he sold more than 125 policies."

There are few states that give the green light to any sort of drilling, mining, and fracking the way that Dick Cheney's Wyoming does.

The reason I think they should really leave the earth's surface in Wyoming as intact as possible is because there's this huge cauldron of boiling magma underfoot, a supervolcano that's overdue for an eruption, and should it erupt it would be the end of the world as we know it.  I do not exaggerate. 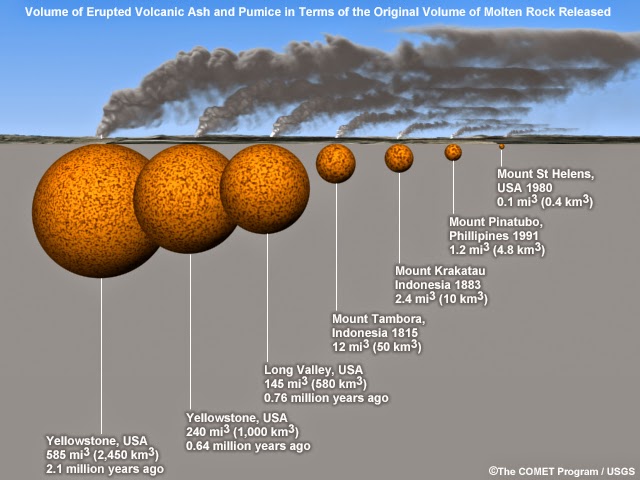 See the tiny little ball of magma at the right of this picture?  That's the Mt. St. Helen's eruption in 1980.  See the two gigantic cauldrons of magma on the left of this picture?  That's Yellowstone, in Wyoming.  And in the Wyoming primary election back in August, a Republican candidate for governor named Taylor Haynes promised to open Yellowstone National Park up for mining, drilling, and fracking.  Thankfully, Taylor Haynes lost the election to a smarter candidate who opposed the idea, but Haynes still picked up 30% of the vote in a state that's virtually completely dependent on the oil and gas industry.

So participate in the ShakeOut on October 16 and learn to protect yourself, learn about fracking, contact your representatives, and find out about the Yellowstone Cauldron.

Here's a whole, captivating movie, praised by scientists and movie lovers alike, that will show you what is basically overdue at Yellowstone, "A true story that hasn't happened yet" (though the movie was made before they found out in 2013 that there is 2 and a half times more magma than they thought there was when they made this movie).

See you at the ShakeUp Earthquake Drill on October 16!  Tell your friends!  And ask them to demand an end to Fracking and irresponsible oil industry practices!!!
by L A Little