My professor gets mad when I say mean things about Mitt Romney without balancing the record with criticism of the Obama Adminstration.  He's not a big Romney fan, mind you, and is promising to go into the ballot box only to cast a single vote against Todd Akin this November 6, but once upon a time Professor Ulichne believed in Hope and Change, which was astonishing given his record of favoring Republican candidates and hating all things liberal.

So earlier today while I was looking through my TwitPic stream I came across the photo below from 2008 and kept it up on my computer screen, nostalgic for an era when he and I were of like mind.  When he kindly came and brought lunch today I showed it to him, hoping it would rekindle some of the Hope... 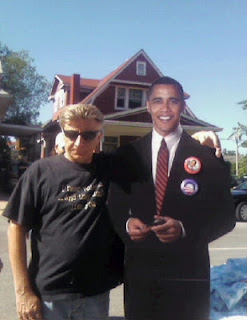 My "hopes" were shot down as soon as he caught sight of the above photograph.  I don't remember what was said during the original tirade of profanity that followed him seeing the picture, but after he returned home he called me with a new quote and asked me to put it on my blog, and for the sake of presumed fairness I will allow him to speak his piece:

He's not exaggerating about the scope of his losses... I blogged about this phenomenon back in 2010.

But since I tend to put the blame for the BP Gulf oil spill more on Halliburton and lax regulation left over from the Bush/Cheney Administration, and since I'm not an oil company shareholder or otherwise tied in with anything resembling the 1%, I continue to hold out *hope* for more *change*, knowing Gov. Romney will only take us back to the same government/energy industry chumminess that got us into this mess in the first place.

So I will try to restore the Professor's "will to live" with some Key Lime Pie and hope for the best.

So you're not at all bothered by all of the human rights abuses by the Obama presidency?

I mean, I respect if you're still going to vote for him, but you're not bothered at all?