Anger from Down Below

For several news cycles we were recently treated to images of Ohio coal miners, grimy from a hard shift of coal mining, standing in long lines for hours to see the man that would save them from President Obama's evil agenda to destroy their jobs. 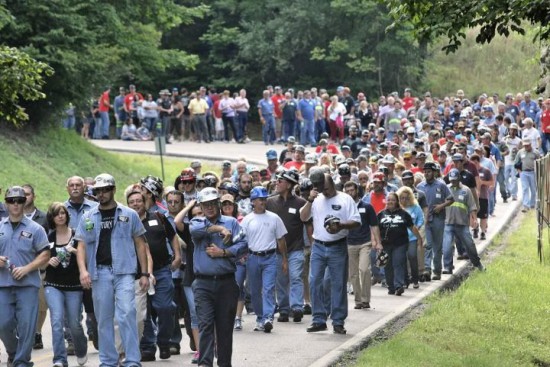 In his clean white shirt, Mitt Romney blasted Obama's War on Coal, citing the President's support of limits on toxic carbon-dioxide and mercury emissions from coal-fired power plants. The angry miners seemed to seethe with outrage at this potential threat to their livelihoods, in spite of U.S. Mine Health and Safety Administration statistics showing that 300 new coal mining jobs have been added, along with a 7% increase in production, under the Obama administration. 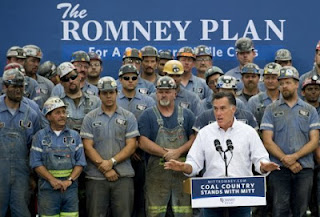 And now comes the reality about these powerful photo-ops designed to tug on the heart-strings of hard workers everywhere.

It turns out that these mine workers had to give up a day's pay to show their outrage to America and the world, but not by their own choice.  Their attendance was mandatory, as ordered by their management.

These coal miners are employed by the Murray Energy Company, the same company that owned the Crandall Canyon Mine in Utah, cited in 2006 for safety violations, where six miners and three rescuers were killed  in 2007.  Murray Energy is headed by Robert Murray, who has given Republican candidates hundreds of thousands of dollars since 2008.

The unpaid miners were instructed to gather at a local school at 8 o'clock in the morning, where, following a roll call, they spent hours waiting to be bused to the rally they were forced to attend, and more hours waiting in the long lines shown around the globe as evidence of the average working man's hostility towards their president.  Several of these miners complained of this in emails to News Radio WWVA talk show host David Blomquist, who broke the story.

In the same time period that Robert Murray was donating hundreds of thousands to Republican candidates, his coal miners were doing the same... sending almost $700,000 exclusively to Republican candidates all around the country.  Ohio miners were sending contributions to Pennsylvania Senator Pat Toomey; West Virginia miners sending contributions to Massachusetts Senator Scott Brown; Illinois workers sending money to Virginia's Eric Cantor.  You can see these contributions at Open Sectrets.org. Not one penny by one Murray worker went to support a Democratic candidate in all that time.  Miners who complained to WWVA's Blomquist stated that they were expected to donate to the Romney campaign.

Now a major union is calling for a federal investigation of Romney's photo-op.  In an unprecedented move, the United Mine Workers of America, comprised mostly of Democrats, are not endorsing ANY candidate in the 2012 presidential election.  Perhaps, as on the day of the Romney rally, they fear corporate retribution.

And this is what happens when labor unions are busted, neutered, and villainized by corporate interests, the politicians in their pockets, and the media.  It hurts the the working class, it hurts their industries, and it reduces American workers to mere props for photo-ops staged to mislead voters in our ever-diminishing, Super Pac-driven Democracy.  Election Day is coming.  Are you registered to vote?
by L A Little

I'm registered. I'm not voting for either of the presidial candidates. I didn't drink the Kool Aid.

Ma'am, I live in West Virginia, so I have to listen to this nonsense all of the time. The oil & gas industry is booming. We're doing fine. There was a time when we had 110,000 coal miners. But, not anymore.

What's really going on here is that the power plants won't burn dirty coal anymore. We have to sell the surplus to China.