Shot Down in Cold Blood

I've been slacking on my KC history blogs, because I've known since last year that the second week of March would bring a monumental story that's been all but completely forgotten to  local history.  I've been saving my fingers for the typing of the days to come.  You see, I had "advance knowledge" that on the morning of March 9, 1870, the editor of the newspaper I've spent years transcribing would be shot and killed in the place which then served as City Hall.

Colonel John Wilder, Senior Editor of the Kansas City Daily Journal of Commerce, while talking with the City Clerk, was accosted by an armed man who told him to "get ready," then shot him in the chest with a revolver.  As police surrounded the assailant, the man drew another revolver.   With guns in both hands he held the lawmen at bay, but only for a moment.  Another offcer grabbed him from behind, disarmed him, and the murderer was taken away under heavy guard.  The Colonel, a Union veteran of the Civil War and a graduate of Harvard Law School, was dead within 20 minutes.

But why was Colonel Wilder assassinated?  Not everybody loved him or his paper.  In early March of 1870 elections were looming in Kansas City, and the Colonel's paper was unabashadly Republican.  The Journal would often times poke fun at the local reporters and editors of other KC papers, with accusations  of alcoholism, hypocrisy, plagiarism, and so on.  The Journal also never passed up a chance to hurl insults at Kansas City's rivals, Leavenworth and St. Joseph.  It's easy to see why there may have been some who disliked the man and his paper, but enough to commit the act of murder?

I can find no modern record of the life or death of Colonel Wilder.  Mentions of his assassination from histories written in earlier centuries give little detail as to the motive, hinting that the killing was over a "personal matter," possibly his involvement with a woman.   Col. Wilder's newspaper, which gave full columns to the (then) recent preliminary hearing of "Wicked Jenny," a prostitute implicated in a brothel murder, will be surprisingly tight-lipped with respect to the details of the grand jury investigation into the death of their departed Senior Editor.  The facts of this case were never laid out before a jury of the assailants peers, as the assailant died in jail awaiting trial following his arraignment.

L A Little is on the case, though.  Like any story that captures my interest, I will leave no stone unturned until I find all the answers, despite the fact that the matter has absolutely no relevance in this day and age and may well be of interest only to myself.  Happily, that's not always the case.
by L A Little 1 comment:

The very first time I saw this picture many years ago 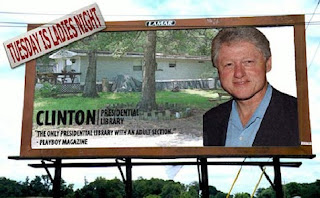 I knew that if the opportunity ever came up to go to Little Rock, Arkansas, I would swing it so that I would be there on Tuesday night.

Years later, I decided to go to Arkansas.  And sure enough, I worked it out so that I'd be in Little Rock for Ladies' Night at the Clinton Library.

I got my hair and nails done, took extra time putting on my makeup, and I dressed as sexy as is appropriate for a woman my age, then set out for a night of fun and frolick at the jumpin-est Presidential Library in America.

Imagine my disappointment when I got to the Clinton Library last Tuesday night, and found it shut tighter than a superglued pickle jar.  The place was as deserted as the men's room at a Justin Beiber concert. 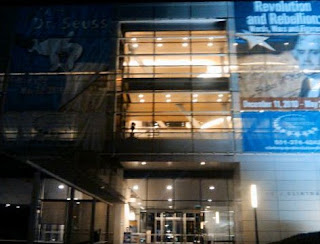 Nothing in paragraph three is true.  In reality, the first time I saw the picture on top many years ago, I knew that if the opportunity ever came up to go to Little Rock, Arkansas, I would swing it so that I would be there on Tuesday night, so I could take the picture on the bottom and blog about my feigned disappointment at missing Ladies' Night at the Clinton Library.  'Cause that's how bloggers are, always thinking ahead, and on the lookout for real and manufactured things to blog about.

Now I'm off to put a big checkmark next to "Blog about the Clinton Library" on my Fantasy List, happy that the adventure was every bit as much fun as I imagined it would be (no doubt moreso for me than the reader).
by L A Little 2 comments: