(Illustration help from Flickr)
The Professor and I were eating at an awesome Mexican restaurant downtown, chosen because we spotted the outdoor seating as we were driving past, and it was a beautiful day. Occasionally we noticed extremely well-dressed people walking by, and couldn't help but comment that these people were probably not heading for the Occupy KC grounds. The statement was not intended to be unkind... it's just that we're from a working-class town and not accustomed to seeing the likes of this kind of affluence walking about on the streets where we live.

We knew they were heading for the Kauffman Center for the Performing Arts, across the road from where we were chowing down. There weren't many heading that way, mind you. A very small line formed at the doors, and just as quickly vanished. After enjoying a wonderful meal (thumbs up!) we decided to meander in that direction and see what was going on.

When we reached the doors of the impressive venue, we asked, "What's up?"  The workers standing by a doorway answered in three words, "Tom Sawyer Ballet." Both of us turned heel at the word "ballet," but it took a few seconds of fast walking before the "Tom Sawyer" part kicked in. Ordinarily, we would have gone on inside and looked around until we either encountered a ticket booth or were asked to leave. Not this time, though. The phrase "Tom Sawyer Ballet" sent us moving quickly in the opposite direction, confused, and I vaguely remember hearing something said about a certain 19th Century author turning over in his grave.

On the way to the library, we pondered the possibilities of such a performance, even generously offering the chance that it might be a Trans-Siberian Orchestra-type rock opera worked around the Rush song "Tom Sawyer." When we got to the library, though, our eyes caught sight of the below flyer, and our worst suspicions were realized. 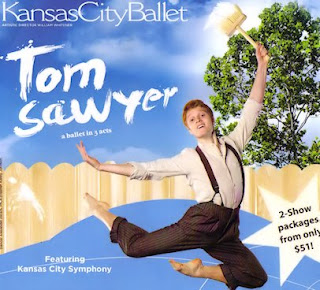 After some much-needed, great, hearty laughter, we grabbed a few of the flyers and headed up to the third floor of the Kansas City Missouri Public Library, a magnificent building and a perfect testament to how government, philathropists, and business can work together to create an invaluable service to the community to uplift, educate, and provide needed services to people of all ages, and from all walks of life. Our business there was finding out how Kansas City commemmorated the 50th and 100th anniversaries of the Battle of Westport, as this day was the 147th anniversary of the battle. After digging around the microfilm for a while it was obvious that if the city did mark the occasion, they didn't make a big deal about it. I did, however, stumble across this article, on the 50th anniversary, dated October 23, 1914:

It was a perfect contrast to today's world, and brought to mind once again the Occupy movement... people tired of being fleeced by bankers and politicians. Except that in the world of Yesteryear, such misdeeds could ruin one's career and send them to the chokey (though Lorimer was acquitted, his boss did some time). In fact, I remember once typing up a 1910 story from the same newspaper about a pawnbroker brought up on charges of "usury"... the pawnbroker had the audacity to charge a man 10% a month interest, and was ordered arrested. "Predatory lending" in the old days used to be a crime, and apparently 10% was considered predatory.

Seeing the wealthies (though not many) lining up to see Tom Sawyer and his paint brush flitting across the stage at probably $75 for the good seats, and reading the story of the indicted banker/politician, fueled the urge to get to the Occupy KC site. Mind you, my Professor is the stoutest proponent of Capitalism I know, and espouses its virtues more than most people. But even he is beginning to realize that the corporations and the politicians' pockets in which they live might be going too far with their greedy treachery, and that "Corporate Personhood" might be the straw breaking the camel's back.

To my surprise he loved the Occupy KC experience, and though we didn't stay long, several times he mentioned returning over the coming days to "bring things they might need." His change of heart about the movement and his enthusiasm warmed my own heart to no end. It was totally unexpected. We will definitely be at the Sunday Rally and as the Professor is a DECORATED Marine Corps Veteran of the Vietnam War, I'm trying hard to get him in with Occupy Marines.  I never dreamed he would be supportive of the protesters, in fact I remember how much courage I had to summon just to admit to him that I was in sympathy with the movement.

End of Part Two.  Next Up:  The Battle of Westport.  Tonight's auction offering is from the Arthur Stilwell collection.  He was a Capitalist's Capitalist, who conceived and built what is now the Kansas City Southern Railway, only to be cheated out of the railroad by bankers and Wall Street during an earlier era of corporate malfeasance.  The bond certificate listed is for his next project, the Kansas City Mexico and Orient Railway.  It would have been a great road...had the Mexican Revolution been timed differently.  At least one family living in Kansas City today benefitted from the project to the tune of gazillions (after the road went into receivership, oil wells sprung up all around them).  The package also includes a photograph of  Stilwell, and a nice little tiny Athearn KCMORR railroad car.
by L A Little