Though I'm not much of a food blogger, I can't help but share my enthusiasm for my new favorite snack. Duros, duritos, doritas, I've seen them called several different things. They look like small, orange, wagon-wheel shaped pastas, but they're not pasta at all, in the traditional sense. On the left is what they look like when you buy them, and on the right what they look like after about 35 seconds in the microwave. 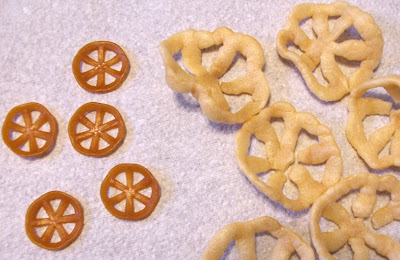 I've heard the same effect can be achieved by deep-frying them, but why add the extra calories and fat when they are seemingly non-caloric as is?

They are crispy and as light as air, yet they're stout and hold up against any kind of salsa or dip, pico de gallo, etc., and I find they are at their best alongside a bowl of guacamole. Eaten alone they are relatively bland, kind of like a Cheeto without the cheese, or more like a Funyun without the "unyun", though I've grown fond of eating them by themselves. In fact, I was on a pretty steady diet of duritos and little else for the week and a half or so that the 2-lb bag I bought for $1.99 lasted.

I got my duritos at a little Dominican grocery store just west of Chrysler on 23rd Street in Independence, Mo., but you can probably find them at your favorite local Latino grocer, or you could pay more and get a lot less at Amazon.com.
by L A Little

Oh, right. Like I need another food addiction. Uh-uh. No way.

Going to my little Latino market around the corner in the morning. let's see what I can make out of these "little" beauties! Thanks for the nifty post!
Hugs from PA!