The Day My Focus Changed Forever 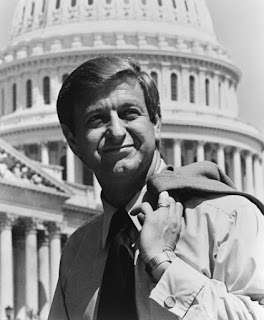 Thirty years ago today, August 3, 1976, I was with my mom as she volunteered outside of a voting poll promoting the United States Senate candidacy of Congressman Jerry Litton from Missouri. I'd heard this guy's speeches and had shaken his hand and was impressed by him, even at the age of nine.

That night, the plane that was carrying him to his victory party crashed, killing the Congressman, his wife, both of his children, the pilot, and the pilot's son.
The roller coaster of emotion on that August 3rd, from the joy at this man's victory to the horror of watching the tragic news unfold on TV helped galvanize my political inclinations for all time.

It was also the first night I got to stay up late enough to watch The Honeymooners, through muffled sobs, while my angry dad stormed around the room insisting that "This was no accident!". The seeds of my future career as a conspiracy theorist were born that August 3rd, at the exact moment that I was introduced to Ed Norton and Ralph Kramden for the very first time.

A few days after this election tragedy I called up the number of Jerry Litton's campaign headquarters that was listed in the phone book, and the nice man at the other end sent me large manila envelopes full of Jerry Litton campaign literature, including a green bumper sticker that read:

It would have happened, too. He was a very intelligent, dynamic, sensible, and compassionate person.

Here's to the Litton family, and how different the world could have been today if you could have fulfilled your ambitions.

I was a 14 year old 4H president from a village 35 miles north of the Litton home. Congressman Litton invited me to come to his home and meet with him. I was too young to calculate how unusual it was for a successful national politician to bother to become acquainted with children who might become future leaders. I can assure you there was no political profit in this endeavor. I was one of many he sought out. He could scarcely find a less important person to spend time with. Jerry Litton was truly working for the future of agriculture in our area. In today's time of highly defined party loyalty, Litton was admired by the Republicans in north central Missouri.

Two years later I was returning home from a summer of burying telephone cable in Nebraska. I was on I-29 north of St. Joseph when I stopped to refill my motorcycle's gas tank. I went inside to pay and heard a radio broadcaster sadly reading the news....

In my safe, among my personal papers, I too have an old green bumper sticker tucked away. When I expire my kids will find it and wonder, for a moment, why I had it.